skip to main | skip to sidebar

(If you have accessed this page directly from a search engine ]Google, Yahoo, MSN], you may want to start at the beginning. Or see the Table of Content Links on the left panel. 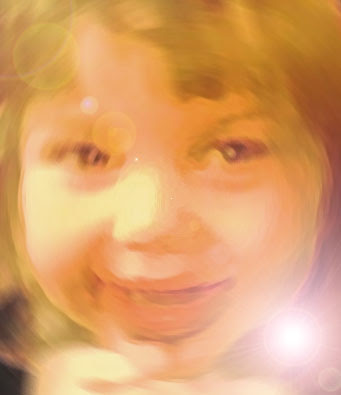 (Music: Opening of Verdi’s “Dies Irae” from Requiem. As the music fades out, lights come up, gradually revealing the split stage. On stage right, ROSALYN, in shadow, sits at a desk, writing a letter. A beer bottle, pack of cigarettes, matches, and ashtray are scattered on the desk. At her feet sits SAMANTHA, who wears pink foot-in pajamas, is engrossed in coloring and eating a snack from a bag, perhaps some potato chips. Girls’ toys that were popular in the 1950's are strewn about. 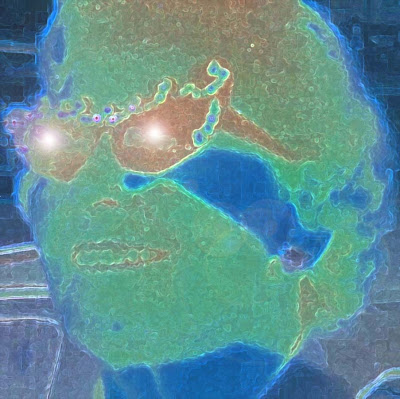 On stage left, AUNTIE sits in a straight chair, holding a martini garnished with an olive. She takes delicate sips from it. Next to her is an end table, with a framed picture of an old man, a pack of cigarettes and lighter. Situated far on stage left and slightly behind AUNTIE, is an overstuffed easy chair, with a pipe on the seat. AUNTIE appears to be crying. On her left arm, she wears a black arm band. Otherwise, she is dressed very flamboyantly, with a bright red satin dress with a low neckline, matching high heels and purse, diamond necklace and matching bracelets, and diamond-studded Harlequin glasses. She has steel gray hair, styled in the fashion of the time. ROSALYN stands up and pats SAMANTHA on the head. SAMANTHA continues to play.) 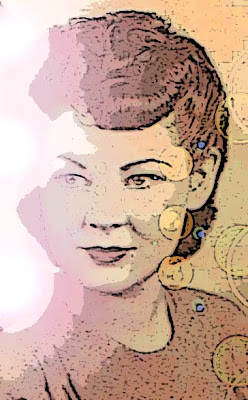 (Reading out loud as she writes):

(ROSALYN puts down her pen and takes a swig from the beer bottle. She takes a cigarette from the pack, strikes a match, and lights up. She takes a long drag, sets it in the astray, and stands. She moves toward the audience and addresses them directly.)

I hope by the time this reaches you things will have quieted down.

That Unkie is gone seems very remote to me‒It just hasn’t soaked in‒I can’t seem to realize it. Maybe if I were home I would, but when we left he was fine, and I have him pictured that way in my mind.

(As ROSALYN continues to speak, AUNTIE sets down her drink and stands up. She picks up the framed picture, stares at it, and hugs it close to her. Throughout the scene, AUNTIE reacts to ROSALYN in various ways.)

When I got Mom’s wire, I thought it was a mistake. I must have read it 15 times before I realized what it said. It still doesn’t seem final to me, no matter how many times I tell myself. When I talk about it, it seems like I’m talking about someone else...

Believe me, it would be easier if I could accept it, but, Auntie, I can’t seem to see Unkie any place else but sitting in that overstuffed chair in the living room, smoking that Sherlock Holmes pipe of his...

(AUNTIE walks over to the chair, picks up the pipe, examines it, and pats the seat. She brushes the head of the chair, where an indentation of someone’s head is apparent.)

I thought he was getting better and the whole thing has hit like a ton of bricks. I had addressed a Christmas card to him and had written in it, planning to mail it in the morning. Do you want me to send it on to you? Anyway, get a good rest and come see us. We love you very much and want to see you...

(ROSALYN takes another drag from the cigarette and snuffs it out in the ashtray.)

If Ricky is accepted for a second tour, he’ll leave February 1st. He has already submitted his application and is among the first 20 to apply, so there’s a good chance he’ll go. We’re getting along pretty well now.

I’m hoping we can make a go of our marriage, put all that awful time behind us.

(ROSALYN takes another swig from the beer bottle.)

After all, he IS Samantha’s father. Still, I’m a little nervous that I’ll be a whole year alone with Samantha out here. I think it would be pretty wonderful if you could come during that time (Pauses). Last letter I said French Morocco, but I made a mistake; it’s the Marshall Islands in the South Pacific. Again.

Vesta and Dame stopped in. I had been trying to call them but couldn’t get them and was surprised when they stopped in.

(Glares at SAMANTHA, who continues picking at the potato chips.)

Why can’t they just visit, without bringing junk and snacks all the time?

She’s on another diet, nothing but steak and lettuce...

Is there anyone else you want me to call?

(ROSALYN goes over to SAMANTHA and pats her on the head.)

You’ve got to see Samantha. She absolutely turns heads when we go out. Must be all that curly hair and cute smile. Dean Platts, Ricky’s Negro army buddy from Texas, says she could be in the movies when she grows up–

–Though she’s getting a bit roly-poly.

(ROSALYN snatches the potato chip bag from SAMANTHA. To SAMANTHA:)

(AUNTIE nods her assent. SAMANTHA tries grabbing the snack bag back, but when it’s clear that the bag is out of reach, SAMANTHA begins throwing a tantrum, kicking and stomping her feet and crying. ROSALYN stashes the bag out of sight, perhaps in the desk drawer. ROSALYN to the audience:)

(SAMANTHA continues her tantrum throughout the rest of the scene, but her cries become progressively fainter, as if she is losing her voice. Now more of a low-level whine.)

I haven’t heard from you in months. Don’t you think it’s time to put all that bitterness behind us?

I wish I could take it all back, but I can’t. I’m ashamed at what I did.

I swear, I’ll never steal from you again.

(AUNTIE places her hand on her hips, as if she’s about to give ROSALYN a major piece of her mind, but then simply shakes her finger at the audience.)

I’d do anything to change things back to the way they were. All I can do is look ahead. Besides, Samantha needs you, needs to know you’ll always love her, no matter about me.

I’m trying my best to turn over a new leaf and stay sober.

(ROSALYN drains the rest of the beer bottle; SAMANTHA intensifies her tantrum–feet kicking and stomping–but without sound, for SAMANTHA now has no voice.)

Well, I have to go now; Samantha is awfully naughty today and cried the better part of the night. Don’t know what I’m going to do with her. She’s teething right now.

(Lights fade out, "Dies Irae," from Requiem strikes up. Darkness and silence.) 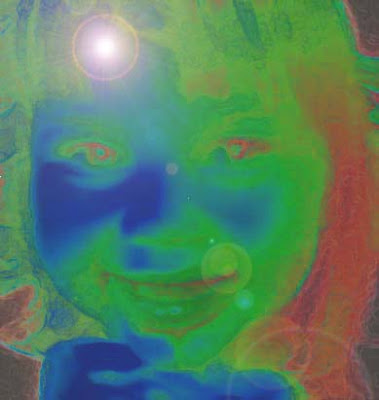 From Body Memoir Politic: Looking, Copyright 2008, Jennifer Semple Siegel. May not be used without permission.

Scenes from Body Memoir Politic: Looking will be posted weekly (or so) until all parts of the play have been posted.

This is an original play by Jennifer Semple Siegel, Copyright 2008, and may not be reproduced in any form without the playwright's permission.